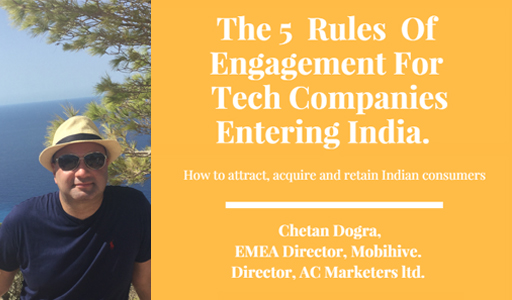 It is no secret that outside of North America and Europe, many Fintech companies view India as a land of opportunity. This excitement stems from the rapidly expanding number of mobile users across the country.

However, while the C-Suite look at the numbers in anticipation, it is advised that executives exercise some caution and take a number of other factors into consideration.

The Prepaid Card marketplace is estimated to be worth $7.98 billion and it’s growing at a rate of 40% each year. However, prepaid cards still account for only 3% of the total debit cards in circulation in India.

Payroll cards have the lion’s share of the prepaid market at 34%, followed by travel cards at 19% and multipurpose cards at 27%.

As of February 2017 there are 1.18 billion telecom subscribers, over 340 million of which (TRAI Stats) are smart phone users; and the growth is estimated to be 14% per year, with 41% unbanked population.

Affordable handsets, low mobile tariffs, increasing data and voice network coverage across the nation are some of the vital factors which will drive more Telecoms towards success in the near future.

The birth of new ideas including Block Chain payment gateways, Data Mining and other value added services such as streaming add to the febrile excitement of what’s possible.

One issue that is slowing down the growth is the trust factor between Indian consumers and new technology, particularly when it comes to digital payments.

Unless companies take the reins and proactively educate and inform consumers about the merits and safety of their products, this lack of trust could prove to be a major drawback in time to come.

Trust issues aside, the above mentioned factors all contribute to the enormous opportunities for tech companies who are seeking to plant their flags in fresh territory.

Past is an Indication of Future Success

Since the mid 80’s there has been a roller-coaster of success and failure stories of foreign brands (especially American ones) who have attempted to enter the Indian market place.

Two examples of massive success include Coke and Pepsi. When these brands entered the market it quickly sounded the death-knell for local brands such as Campa Cola and Gold Spot. Both brands were adored by locals (including myself) until their American rivals arrived on the shores of Mumbai.

A surprising example of a company who has struggled in Indian for some time is McDonalds. In 1996 McDonalds launched in India with the release of their local version of the Big Mac- the Maharaja Mac.

What they failed to consider, however, is that large a percentage of the Indian population is vegetarian and that the cow is considered sacrosanct to the Hindu faith.

Fortunately for Ronald and Co. their coffers are so full that they can afford to throw money at a problem until it a) goes away, or b) they find a solution.

Today McDonald’s presence in India includes 300 plus branches with an estimated turnover of 550 billion Indian rupees.

In recent years, India has had some great successes in the tech space.

Companies like Snapdeal, Flipkart, Paytm and Ola have given giants such as like Amazon and Uber stiff competition.

The Indian government has openly embraced investment in the tech space and have offered start-ups a plethora of new regulations and incentives such as easier compliance, tax breaks, intellectual property rights protection and faster registration of patents.

There have been some reservations regarding the new Goods and Service Taxation (GST) system, which was introduced in July 2017, however, the general consensus is that this will not become a hindrance to the long term success of the market.

How International Fintech Companies Can Win the Indian Consumer

Clearly there are some very lucrative opportunities for investors and companies who are willing to commit resources to India.

For any Fintech company with an eye on entering the marketplace, here are 5 factors which will define their success or failure.

Do not go it alone. Find a go-to market person or business which already has established connections in the market, ties to local service providers and an understanding of the nuances of the region.

Seek a guide who has a documented record of success and preferably has experienced living on both sides of the river or has an existing operation set up in the market.

Your guide does not necessarily need to be fluent in your product or service; what is more important is their go-to market strategy and understanding of the consumer.

You can begin your search by finding a business which sits in a similar space to you and who has been established in the market for a while (usually 5+ years).

Make In India (http://www.makeinindia.com/home) has great information on taxation, investments and regulatory frameworks. If you contact them they may be able to point you in the right direction.
LinkedIn has approximately 42 million active users.

Local job site www.naukri.com is a great resource to use to look for professionals, such as business development managers, consultants and project managers.

You will also need legal guidance and counseling. So get in contact with well established, commercially minded and fairly priced Indian law firms.

Here are two that I recommend to my clients (I have no commercial affiliation to these firms):

2. Become Entrenched in the Culture

As mentioned earlier, McDonald’s failure to understand the culture and the people could have had massive consequences for a smaller outfit. Understanding the local culture will play a major role in your success.

In a country which boasts 1,550 different languages and various cultural nuances every 50 km, it’s very easy to make a statement or release a marketing campaign which could be deemed as culturally insensitive or does not connect with the consumer.

Google has done a fantastic job at understanding the culture. They celebrate the national holidays, pay attention to Indian pop culture and give a hat tip to figures of historical significance.

Small gestures like this will endear your brand into the heart of the Indian consumers.

Which roughly translates to “It will be done”.

The question that most foreign Project Managers (PM) ask themselves in response to hearing this is “…but how much longer?”

Patience is probably one of the most important virtues that a PM can have whilst working in the Indian market.

For some foreign business leaders, the nation-wide relaxed attitude towards working culture will be frustrating.

The key is to try and find a careful balance between understanding the working culture and training your local staff on your own company culture.

This is not an easy tightrope to balance on, but with persistence you will be able to find a happy medium.

Patience + Persistence + Proper Training is the formula for success.

Most businesses I speak to who are planning to enter the market have not conducted extensive consumer research to understand their target audience.

Foreign brands often apply broad-stroke marketing strategies which are generally based upon what has been successful in other geographic regions.

Your strategy should be to deliver a customized experience of your brand for Indian consumers. Whilst studying for my International Business MBA at The University of Hertfordshire we conducted a case study on the drink Horlicks and its international presence.

In the UK, Horlicks www.horlicks.co.uk, is positioned and marketed as a nutritional drink which should be consumed before bed and helps the customer sleep peacefully throughout the night.

However, when the brand launched in Nigeria they conducted a consumer research project which revealed that their Nigerian customers were consuming the drink to increase their size, strength and stamina! The complete opposite to their UK counterparts.

Horlicks was shocked, but made a strategic decision to position the brand according to their findings. This simple adjustment in strategy led to many years of growth and success in the West African market.

Besides creating a bespoke brand experience, your marketing collateral should consistently highlight the benefits of your product or service to your target audience.

Indian consumers are very adept at calculating the pros and cons of a purchase, often making a buying decision based on which one outweighs the other.

This means that they are driven by pleasure as opposed to the fear of missing out (FOMO).

5. Find Cost Effective Solutions to Get In front of your Consumer

Social Media (SM) marketing is an invaluable asset to tap into and acquire customers, and works extremely well in the Indian market.

The top SM channels have worked out great deals with mobile phone OEMs to ensure that their apps are pre-loaded on the handsets.

To understand the true potential of SM in India, let us look at the numbers:

Facebook: 241 million active users (more than double the population of the US)

WhatsApp: over 200 million active users (WhatsApp is owned by Facebook)

If you want to know how detailed you can be when it comes to targeting consumers on social media, here is some of the demographic targeting which can be done using the Facebook Ads manager:

The marketing sophistication within these channels is truly staggering and the cost of acquiring customers is a fraction of traditional mediums.

Once you get your messaging right in Hin-glish (a cross between Hindi & English) you can sit back and rely on your channel of choice to do the rest of the hard graft.

Here are some local and very switched-on social media marketing agencies I recommend you contact:

I advise that any company wishing to enter the Indian market to make a trip to the country to ascertain and evaluate the true market potential.

Even if it doesn’t work out, you can at least visit the Taj Mahal or get great dental work for half the price of your own local dental surgeries.

Chetan Dogra has helped a variety of Fintech, Mobile VAS product businesses find their ideal customers and successfully enter the Indian market. For good 30 years he has worked in Indian market & still holds business interest in India. He is a British national from Indian origin living and working in London, UK with his wife and 2 children.